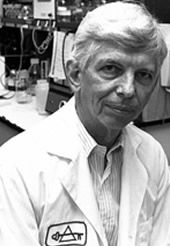 Knudson is known for his 1971 “two-hit hypothesis,” which explained how a mutation in a tumor suppressor on one chromosome can cause hereditary cancer, even if the copy, on the other chromosome, is normal. Knudson came to this theory after comparing eye tumors, called retinoblastomas, in children whose families had a history of these tumors versus those from families who didn’t. He found that those without a predisposition had a single retinoblastoma in one eye, while those with the predisposition had retinoblastomas in both eyes.

Citing this research, Knudson went on to postulate that a mutant gene passed from generation to generation provides the so-called “first hit” because it automatically predisposes the carrier to develop cancer from the time he is born. As the person ages, various wear and tear on the normal copy of the gene (caused by copying mistakes or environmental stress) causes it, too, to mutate, providing the so-called “second hit.” Knudson’s insight, therefore, explains how inheriting a mutant gene increases a person’s chance of developing cancer earlier in life, as opposed to someone born with two normal genes.

Until Knudson came along, scientists thought cancer was caused by the over-activity of cancer genes (oncogenes). But this new hypothesis inspired subsequent years of research into genes that may protect us from cancer, leading to the discovery of several such genes like BRCA1, BRCA2, and T P53, just to name a few. In 1998, Knudson won the Albert Lasker Clinical Medical Research Award for his work and has since been heralded as the “Mendel of Cancer Genetics.”