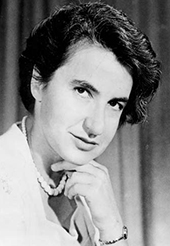 In the 1950s, chemist Rosalind Franklin used X-ray diffraction to take pictures of DNA, and, along with her colleagues Maurice Wilkins, James Watson and Francis Crick, discovered the famous double-helix structure we all know so well. This breakthrough laid the foundation for our current understanding of genetics, but, unfortunately, Franklin did not live to see the full impact of her work; she died of ovarian cancer at the age of 37. Today, people argue over whether her cancer was caused by an inherited mutation or by her repeated exposure to X-rays. (At the time scientists did not understand that radiation damaged DNA and thus repeated exposure could lead to cancer, so no one used protective equipment when working with X-rays.)

Since genetic testing wasn’t available during Franklin’s life, we can only speculate as to the true cause of her disease, but there’s a good chance that her cancer was caused by both factors. Cancer that appears at a young age can be a sign of an inherited mutation—plus, Franklin was of Ashkenazi Jewish descent, a group that has a much higher incidence of BRCA mutations than the general population. A BRCA mutation could have given her cancer a head start, while exposure to X-rays could have hastened the onset of the disease even more.