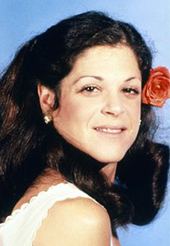 Gilda Radner was a famous comedian best known for her work on Saturday Night Live in the 1970s. Her impersonations of Barbara Walters (aka “Barbara Wa Wa”) as well as her original characters, like Emily Litella and Roseanne Roseannadanna, helped immortalize her, even after her premature death from ovarian cancer at age 42.

While Radner was not able to benefit from genetic testing since it was not available at the time of her diagnosis, there is a good chance she was a carrier of a cancer susceptibility gene mutation. Years after she died, her husband, Gene Wilder, told the press that Radner’s cancer had gone undiagnosed for a long time. When Radner went to doctors with her symptoms, little was known about the genetic causes of ovarian cancer, so no one asked whether she had a history of cancer in her family. If her doctors had known that Radner’s grandmother, aunt and cousin each had the disease, they might have considered a cancer diagnosis earlier, and she might have received treatment more quickly.

We’ll never know if that earlier diagnosis would have saved her life, but her legacy certainly lives on, both as a performer and as a cancer patient. In 1995, Wilder and others close to Radner founded Gilda’s Club, a nonprofit that provides free support for cancer patients.